I’m just back from Imaging USA, the National Convention that is put on by the Professional Photographers of America every year in a different city. This year we were in San Antonio and almost 10,000 photographers came together for 5 days of education and fun. I’m a proud member of the PPA and have the honor of being an elected member of the council. Basically, the councilors are like the House of Representatives, we are elected according to state and we then elect the Board of Directors, vote on bylaws, that sort of thing. There are 30,000 photographers in the PPA, the oldest and largest photographic organization in the world. 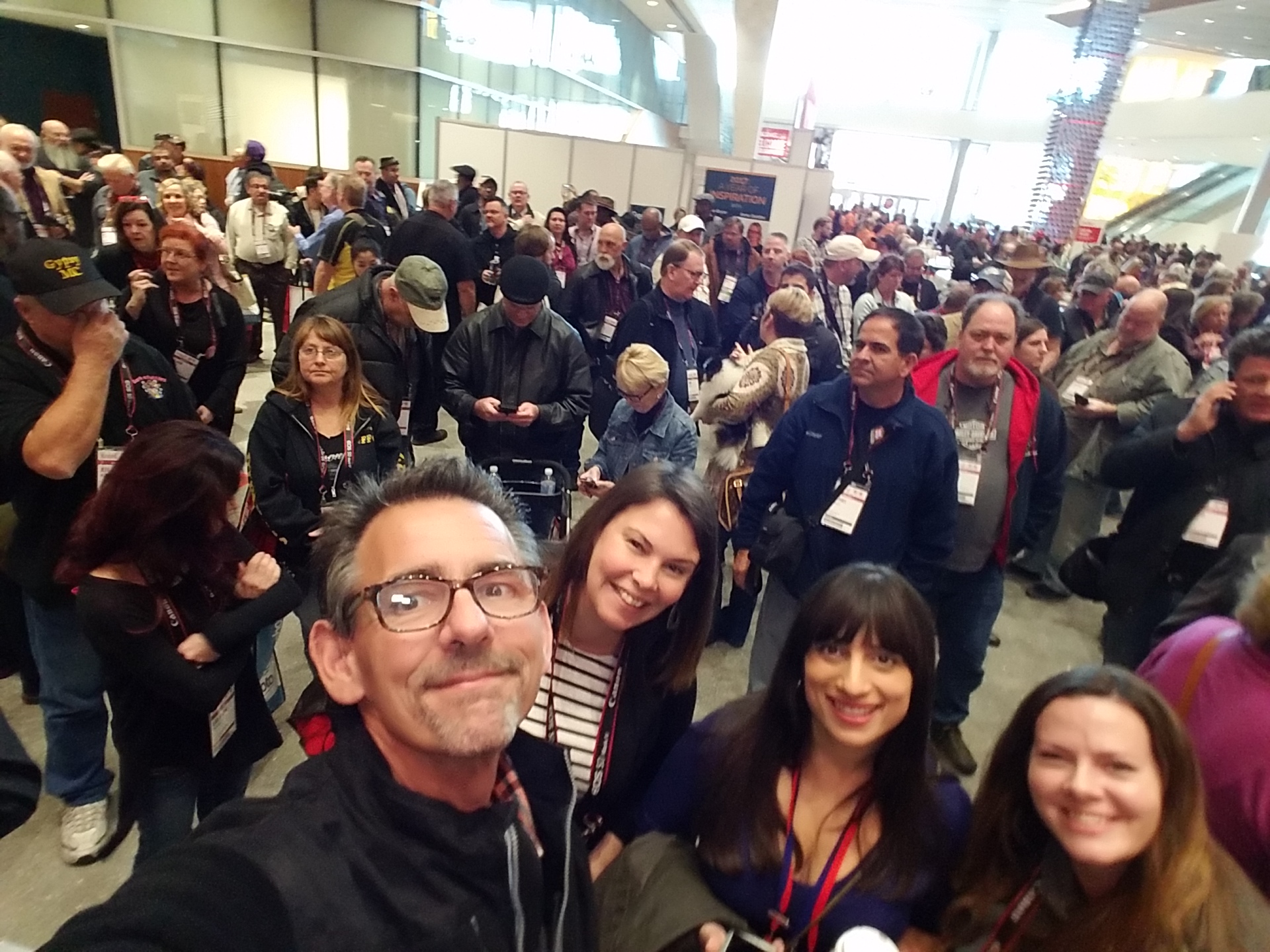 I have a friend who approached me in the parking lot at the beach one day. She was President of our local chapter of the PPA and saw me loading my gear. She just walked up and invited me to come to a meeting. She literally changed my life. Since that day I have made more friends than I can count. For me, going to Imaging USA is like going to a family reunion (except fewer fist-fights) 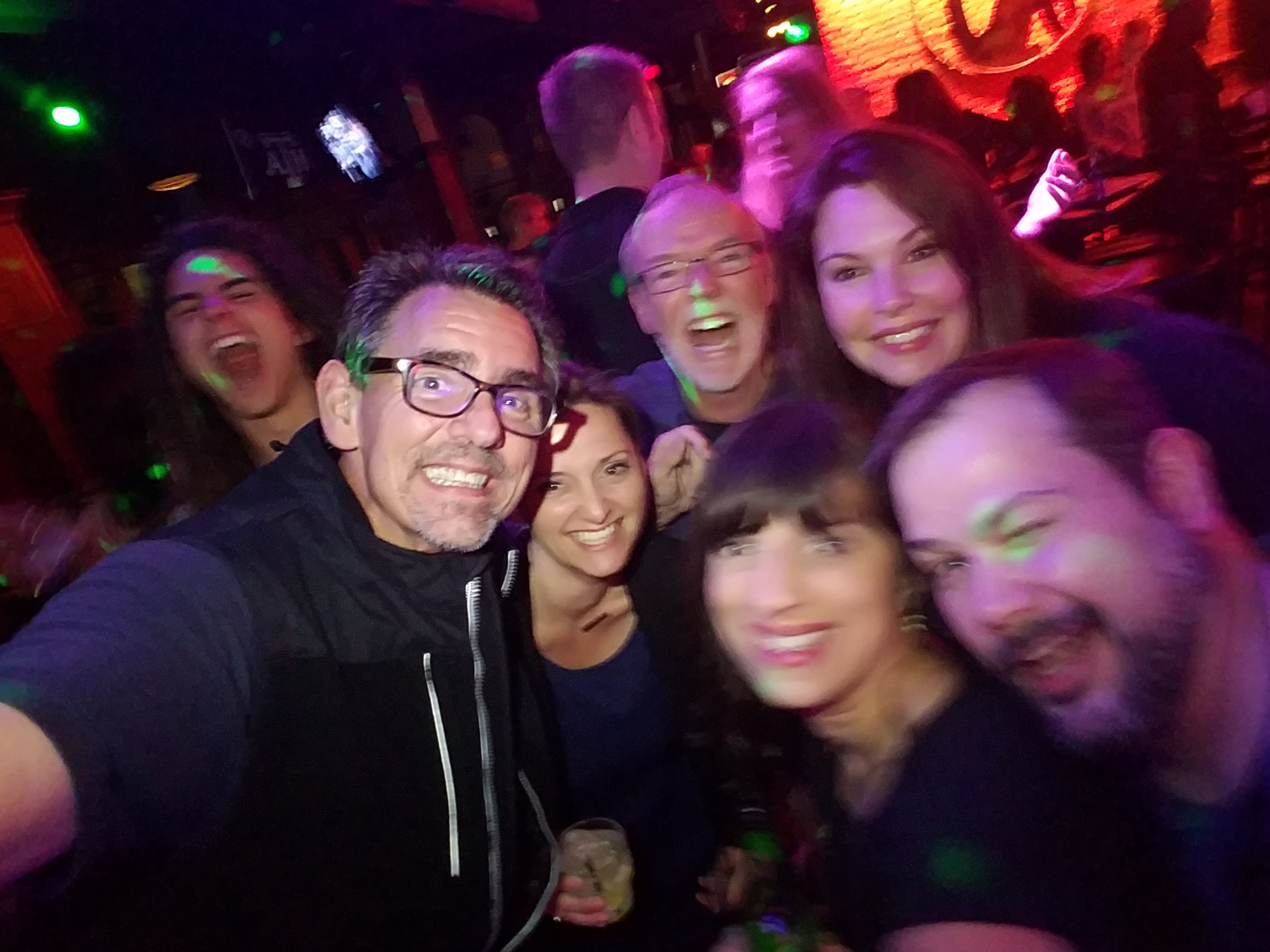 It’s not ALL education at the convention. There may be some drinking involved…

I wanted to share a story from this year’s convention that I think you’ll enjoy. I’ve had a lot of fun at Imaging USA over the years but this year something happened that was truly special. In addition to the teaching programs and the tradeshow, we also have something called the International Photographic Competition. Photographers enter up to 4 prints to be judged by a panel. Some of these images are selected for the “Loan Selection” which is a prestigious honor. From those images, a few are selected for the Grand Imaging Awards in different categories (Best Pet, Best Wedding, Best Portrait, etc). These awards are announced at the convention in a giant theater like The Academy Awards. This year, I was the announcer for the awards. I was the guy who said, “Please welcome to the stage, blah, blah, blah..” I spent the whole show in the wings with a microphone. (I was a professional DJ for 20 years so I get asked to do this stuff all the time and I’m happy to do it. Public speaking is scary for most people but easy for me.) 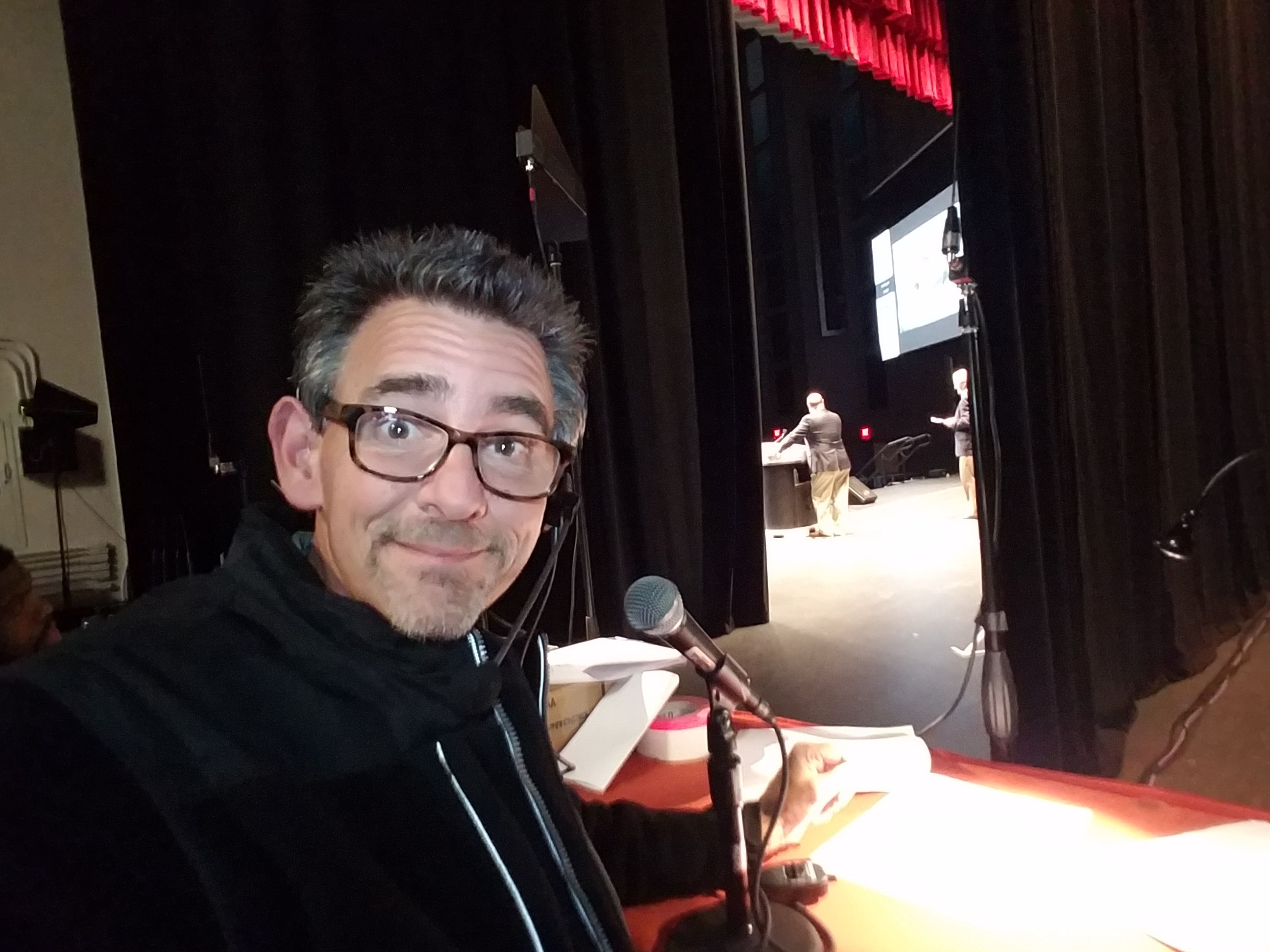 At my microphone backstage

I know this is a long story but stay with me because the payoff is sooo worth it… Anyway, we had a rehearsal that afternoon so everyone could practice. All the presenters had a script to read from with the names blacked out so that no one would know the winners until that night. But, because I was the announcer and had to be sure I could pronounce every name correctly, my script was not blacked out. So, during rehearsal I just announced my own name as the winner of every award, which got a good laugh. 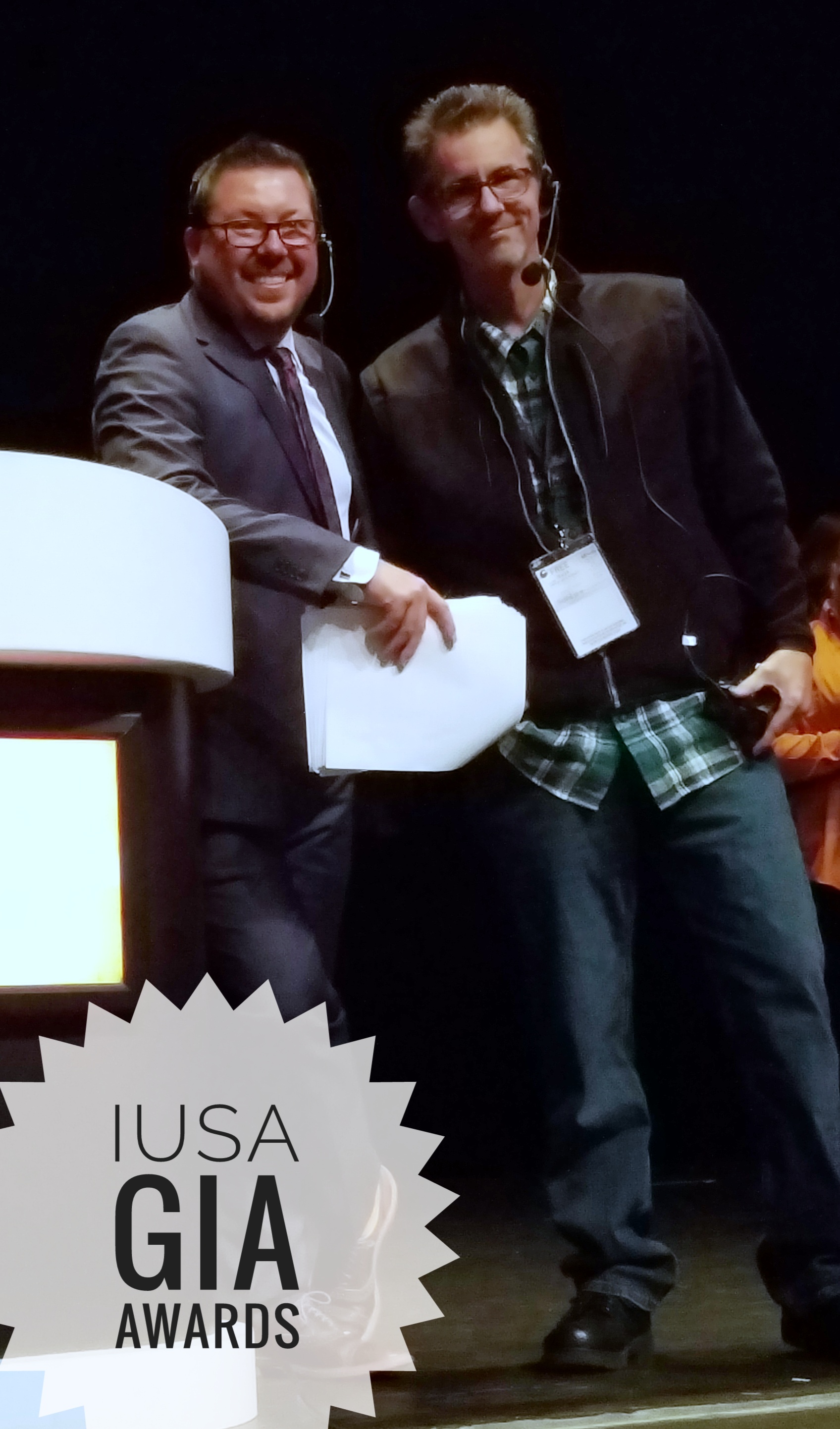 On stage with Rich Newell, IPC Director, just before the awards start.

After rehearsal, I walked to the hotel to grab a sandwich before heading back for the ceremony. I was sitting at a table with a couple of people when Barbara Breitsameter walked over to us. Barbara is an incredible photographer and photoshop artist who specializes in pets. She also has Parkinson’s Disease. She had a walker that day and she trembled as she approached. Barbara is truly a remarkable woman. Here’s a little video about her. Watch it and see for yourself:

“How are you doing, Barbara?” we asked. “”Well,” she said, “I have my good days and I have my bad days. Today is a good day.” Now remember, I had seen the script so at that moment I knew that in about an hour, Barbara would win 1st AND 2nd place in the Pet Category, be selected for the World Cup Team AND win the Grand Imaging Award as the best image of the year. All I could think was, “You have no idea what a good day you are having!”

Later that night, when Barbara won, the house went nuts. Standing ovations, crying, everything. I even made a mistake in the announcing because I was choked up…

It was moving and inspirational and joyous and everything you could hope for. I’m lucky to have been a part of it. Here’s the image that won it all: 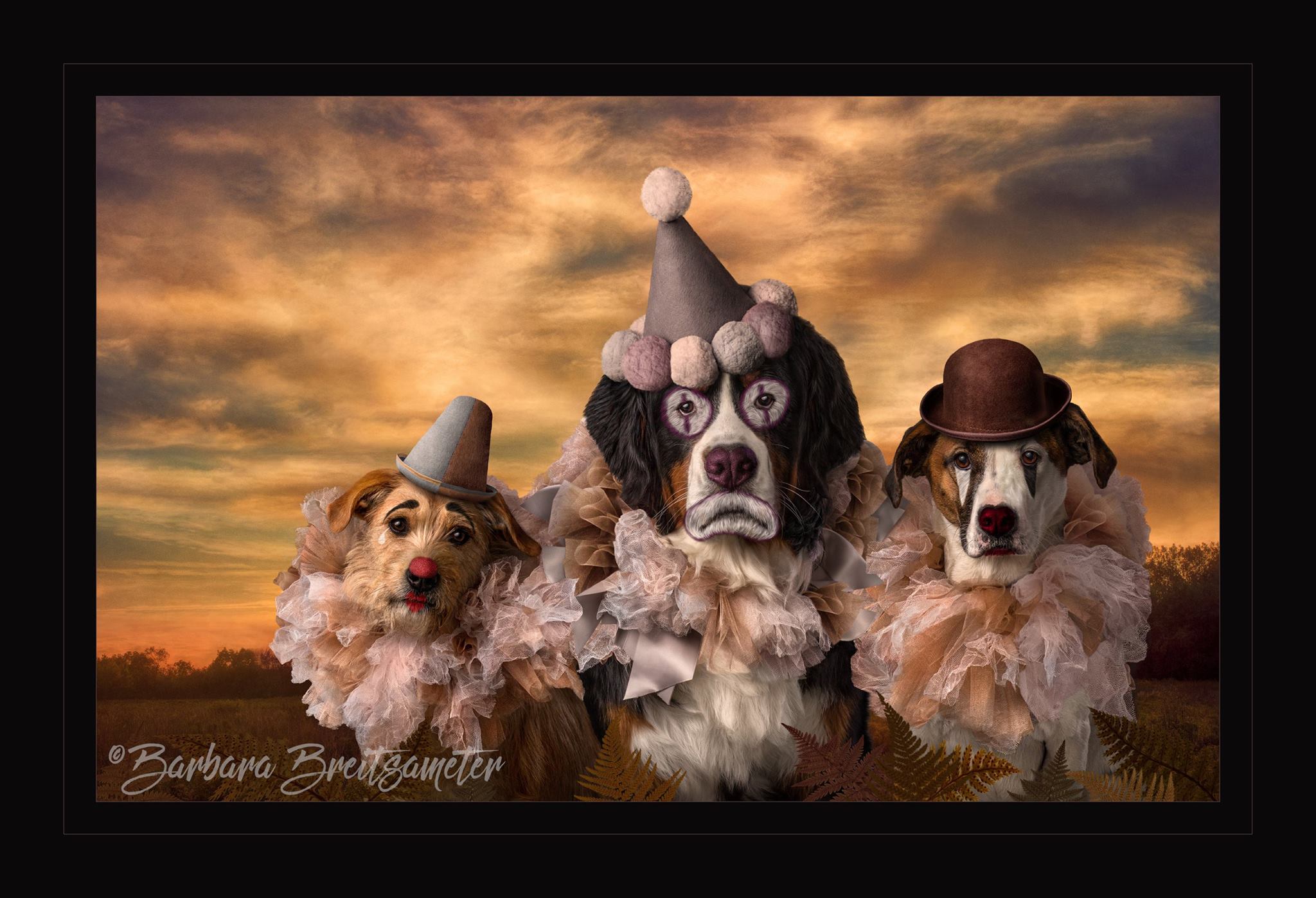 “Send In The Clowns” by Barbara Breitsameter

You can see more of Barbara’s work on her website.