Am I smart or an idiot? You tell me…

Let me start this post by pointing out how important it is to get lots of pictures of “stuff” on your wedding day.  Every good wedding photographer knows this and we are careful to document all the “stuff” that surrounds your day.  We take pictures of the rings, the dress, the shoes, the place cards, the tables, the flowers, and on and on.  I’m pointing this out because I want to make it clear that this “stuff” is important and I take lots of pictures of “stuff.”

This all makes sense to me.

Yet, I don’t put nearly as much “stuff” on my website as most photographers.  I recently was looking at a website for another photographer and I saw six images before I saw a human being.  I get that they want to set the scene, etc but I can’t help but think that no one ever hired their wedding photographer because of all the great pictures of “stuff” on their website.  I think that people are in a hurry ….and the best way to impress them is to show them pictures of people and activity because that’s what you are hiring a photographer for… oh sure, “stuff” too but I have to believe that it’s the dynamic shots of the bride and groom that will have a better shot at bringing a client to your door.  I also tend to think that if you don’t grab someone’s attention in the first few shots you will lose them and I can’t imagine someone thinking, “Wow, look at these great pictures of “stuff!”… show me more!”

I should also point out that it takes a lot more talent and skill to photograph people than “stuff.”  I can’t imagine someone thinking, “Well, these are amazing images of people on their wedding day…. but can he take a picture of a cake?”

Isn’t this more important than the picture at the top?

I think I must be because everyone puts more “stuff” pictures on their website than me. Even when I post pictures of “stuff” I tend to favor the ones that also feature people. 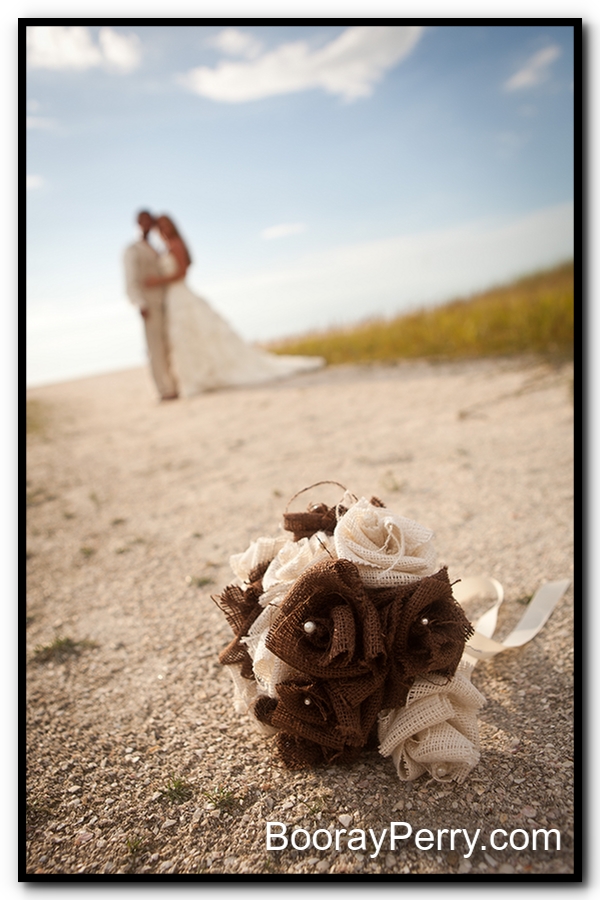 Even with a burlap bouquet, I still manage to sneak some people in..

Here’s another thing: I let my clients have a great deal of control over what images go into their wedding album. Complete control, in fact.  I frequently have to add pictures of “stuff” to the album because the client doesn’t pick enough of them as “favorites.”  If the album is squeezed for space, the “stuff” is the first thing they want removed. But, if you look at the majority of photography websites out there you would think that the “stuff” is the most important… well… “stuff.”

What do you think?  When you are looking for a wedding photographer, how important are the pictures of “stuff” in your decision to schedule a consultation?  How many pictures will you look at before you make a decision on whether to stick around or move on?