Let me start this story with another story:

Several years ago, I read a story by Noah Wiley, the actor, about his being asked to appear on “Sesame Street.” He was quite moved by it, having grown up watching the show. He echoed something that I have heard other celebrities say…. that they didn’t really feel famous until “Sesame Street” asked them to appear. For many people, “Sesame Street” was the first place they saw a celebrity.

At least I think that’s what he said. I can’t find the article online and so it’s possible that that I’m just projecting my own feelings onto my memory of the article but the bottom line is this: Sometimes the thing that makes you feel like you’ve “made it” isn’t the same for everyone.

So, with that in mind, let’s jump back 10 years to a younger Booray Perry, who has just started his photography business and become a member of the Professional Photographers Association of America. Part of your membership is the monthly magazine which features incredible images and stories about photography.

In every issue of the magazine, there is a double-page ad from Miller’s. Miller’s is a professional photo lab, one of the largest in the country and they are a huge supporter of the PPA. In addition to advertising in the magazine, they support the convention (Imaging USA), they provide giveaways and door prizes to local groups and they have a big roster of supported speakers… photographers who travel the country teaching workshops.

When I first started my business, I joined PPA and received the magazine in the mail. I devoured every page and every article trying to absorb anything I could to turn me into a real photographer. One of the things that always stood out for me was the big ad from Miller’s. You see, Miller’s always features a photographer in their ad. I would look at that ad and think, “That’s a real photographer.” I mean, how good do you have to be to be featured in a national ad campaign? That’s reserved for movie stars and sports icons in the regular world so in the photography world, to be featured in a national ad by one of the largest labs in the country? That’s something.

Eventually I got good and started to make a living. Then I started going to conventions and such and meeting other photographers. I decided to become a speaker and Miller’s was gracious enough to take a chance on a new guy and add me to their speaking roster. I spoke at Imaging USA, taught a Pre-convention class, hosted the Grand Imaging Awards and hosted a webcast from the International Photographic Competition. In January I’ll speak again at the convention and host a series of shows as well. My business is strong and I’m generally well known in my little world. I have a podcast. I have every reason to believe that I’ve finally “made it.”

Except for one thing. One silly little thing. I’ve never been featured in a Miller’s ad. Now, anyone in my world who reads this will tell you that’s crazy… I’ve certainly proven to myself that I’m a “real” photographer. But it doesn’t matter because, for me, that ad represents something from my photography “childhood.” That ad is Sesame Street.

The December issue of Professional Photographer Magazine is shipping as I write this and this month’s issue is very special for me. 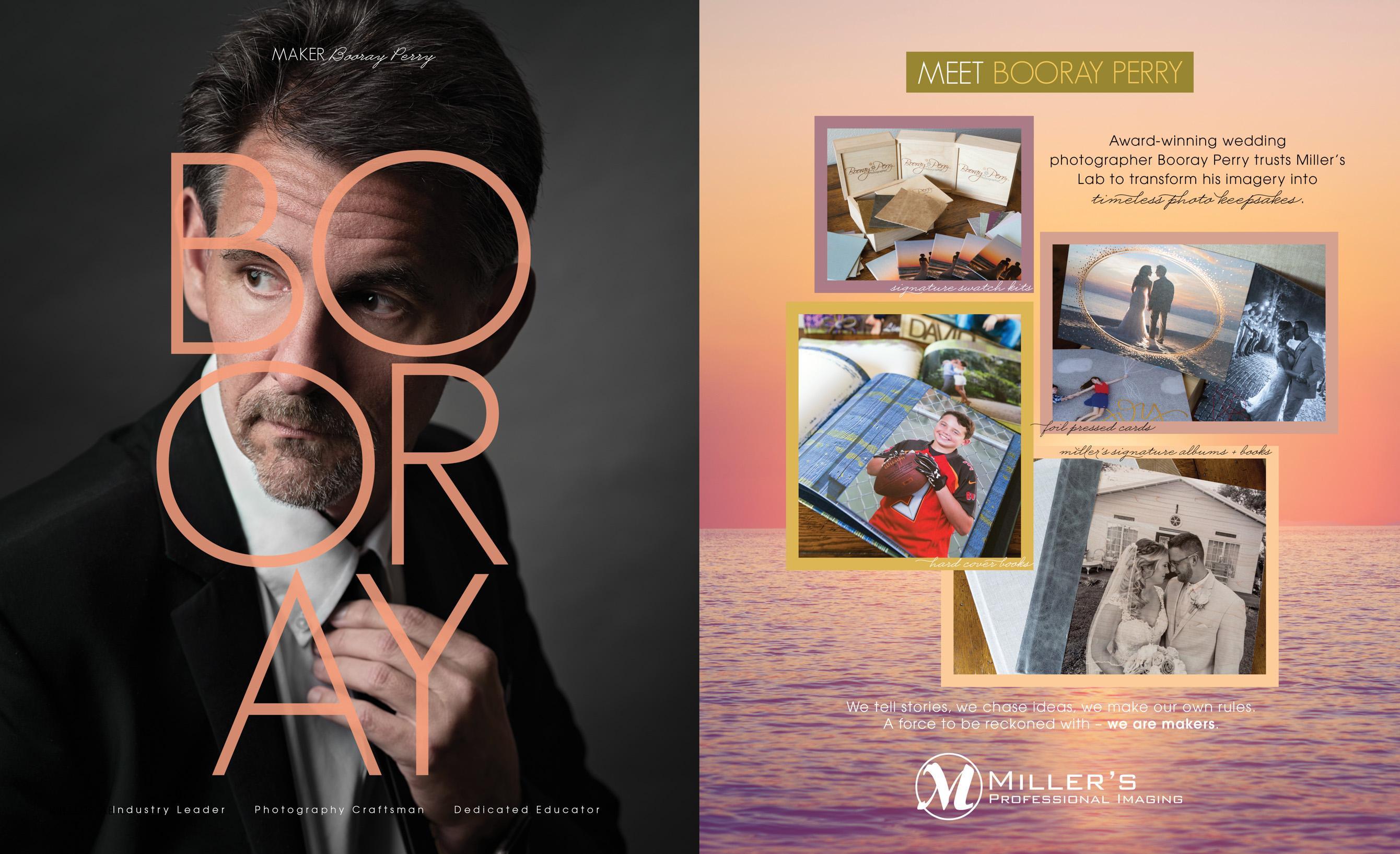 I know I’ve achieved everything I set out to do. I know I’m a good photographer and I’ve been recognized in so many ways…. but this ad, this ad still means something to me. Just like Sesame Street, It holds a place in my heart. When I started I just wanted to be good enough to make a living. I never allowed myself to think that one day I would be speaking at the national convention or serving as an elected councilor for PPA… and never did I think I would be one of those people in the Miller’s ad. It’s like watcing Sesame Street and thinking, “Maybe one day they’ll ask me to come on!”

Did I blatantly ask to be in an ad every chance I got? Yes. Yes I did. Not gonna pretend I didn’t. Don’t judge me.

Debra Radell is the person at Miller’s who has to listen to my non-stop blather and claims she had nothing to do with my selection for the ad. (I don’t believe it). Samae Claspill was the person who walked me through it. Kira Derryberry is the wonderful photographer who took my picture and managed to make me look cool, a task as daunting as humanly possible.

Every month it’s a different photographer and every month a different word over their picture. (“Joy,” “Smile,”) etc. In my case they used my name. I’m not sure if they couldn’t come up with a word to describe me or if they just decided that my stupid, weird name was the most recognizable trait I posses. Probably a little of both.

I finally made it.